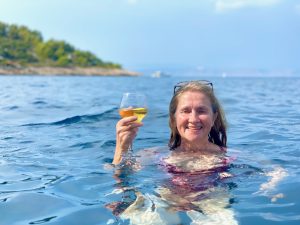 By rights, I should not like wild swimming. I’m not a particularly good swimmer, never taught, other than by my dad on Sunday mornings in the local leisure centre (Darwen Baths, for those who remember it.) I certainly didn’t go to a school with its own swimming pool. My efforts never got beyond a gentle, head-up breaststroke, a far cry from the industrial-strength front-crawl that seems obligatory before venturing into open water.

I have a fear of deep water. Were my life to depend on it I could not float face down in the middle of the lake and look beneath the surface. (I’m shuddering at the very thought.) The underwater world is one that terrifies me. I have to glide over it, in a sort of pretending-it-isn’t-really-there way.

Odd things in the water spook me too: the large buoys marking swimming routes are freaky as f–k close up; should the wind urge one towards me, I’m scrambling away like the hoards on Amity Island beach after someone yelled ‘shark’. And don’t even mention the weed-strewn chains that anchor the things to the lake bed – they are the stuff of nightmares.

Speaking of weed, its nasty stuff. Trailing around legs, tickling an outstretched arm; it doesn’t matter how many times I tell myself that of course a lake will have weed, it always takes me by surprise. OMG, something touched my foot!

And I’m probably risking some awful disease every time I venture in. The Marlow lake where I swim two or three times a week in summer is a wildlife sanctuary, and I love swimming past duck colonies, avoiding the swans when the cygnets are around, watching flocks of noisy geese glide in for landing. A highlight of summer this year was seeing a kingfisher for the first time. But all this avian life leaves a trace. I can’t approach the lake without stepping in bird poo and it has to be responsible for the gleam of green algae hovering in the water. And that’s before I start on Weil’s Disease, EColi, gastrointestinal infections…
No, wild swimming should not be for the likes of me.

And yet, and yet… slipping into water under an open sky has an instantly calming effect. The coolness soothes the soul, and the gentle exercise lifts the mood. As the season for open water swimming draws to a close (Marlow lake closes tonight) I find myself awash with melancholy; at least seven months before I can venture back. This wonderful Indian summer we’re enjoying is merely adding salt to the wound.

By the same token, I should not be a commercially successful crime writer, because on paper, I simply do not have what it takes. Unlike many of my peers, I didn’t study English at one of our top universities. I’m not especially clever, a fact brought home to me in humiliating fashion when I’m sharing a panel or an interview with those (the majority) who are. My fellow crime writers are so erudite and articulate on politics, literature, social justice, culture, women’s issues, current affairs; my own views feel ill-formed, childish in comparison, not worth repeating.

I’m not brimming over with ideas like some. Not for me the treasure chest of story-gems, tumbling out across the desk, vying for attention, calling, ‘write me, me next, over here!’ I have to work so hard for each of mine and spend months at a time with a feeling of cold dread in my stomach. What if this is it? What if I’ve run out?

I’m not articulate and my vocabulary is far from great. I use so many words whilst only having the vaguest idea of what they mean. (I check before submission, I’m usually right but even so) Imposter syndrome is common among writers, especially new ones who suddenly find themselves sitting next to their heroes at dinner. Most get over it; it never left me. This house of cards I’ve built around myself could tumble at any time, leaving me exposed, an imposter, a pretender to the throne whose claim has been proven fraudulent.
No, I should not be a crime writer.

And yet, and yet… somehow, by a process I can’t begin to explain or rationalise, the words come. They flow through my fingers onto the screen and they’re not awful. They arrange themselves, forming a rhythm and a grace that I couldn’t have begun to plan. They work. They conjure pictures, they engender emotion, they tell a story. I should not love wild swimming, and yet I do; I should not be able to write, and yet I can.

The moral of all this musing: when something works, don’t question it. Just do it.