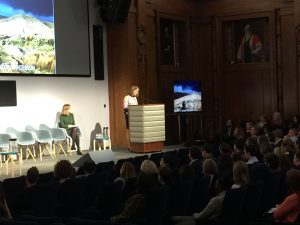 Sam Eades, Editorial Director at Trapeze, has acquired three novels from Sunday Times bestselling author Sharon Bolton. The deal was struck by Anne-Marie Doulton at the Ampersand Agency, for World English rights including audio. Sharon Bolton has sold over one million copies worldwide, winning the Mary Higgins Clark Award for her second novel Awakening and the CWA’s Dagger in the Library Award for a body of work.

The first novel The Craftsman will be a superlead title for Trapeze in Spring 2018.

Beginning a trilogy of ambitious, brooding thrillers, The Craftsman draws upon Sharon’s own background of growing up in the north of England, in the shadow of the Pendle Witch Trials, the Moors Murderers and the Yorkshire Ripper.

Switching between 1969 and 1999, The Craftsman is the story of a community shattered by a merciless predator, and of a young police constable, out of her depth in a climate of misogyny and superstition, battling to solve a case that could make her career. Or change her forever.

Sam Eades, Editorial Director at Orion said: ‘Sharon Bolton is a writer like no other; a writer who instinctively knows our greatest fears and explores the darkest corners of the reader’s mind. She is also one of the hardest working authors in the industry. I have been a huge admirer of hers for years, and know the team here has the vision, passion and experience to take her career to even greater heights. With The Craftsman Sharon has produced her best work yet, the thriller everyone will be talking about in 2018. She will be a jewel in the Trapeze list, and we are very lucky to be publishing her.’

Sharon Bolton, author said: ‘From our very first meeting, I was hugely impressed by the energy, enthusiasm and professionalism of the Trapeze team. I’m honoured by their confidence in me, and very much looking forward to working with them on The Craftsman.’

Anne-Marie Doulton, agent said: ‘Sam Eades’ boundless enthusiasm for and belief in Sharon’s writing together with Orion’s forensic approach to marketing, promotion and sales proved a winning combination. Sharon has spent 10 happy years with Transworld, and the decision to move on was far from easy, but in the end we were both persuaded that the invigorating environment of new imprint Trapeze offers exactly those opportunities and challenges Sharon is keen to embrace. From what I’ve seen so far of The Craftsman, readers have something exceptional in store for them.’

David Shelley, CEO of Orion said: ‘I am so thrilled that we’re going to be working with Sharon Bolton. She is one of my favourite crime writers and I can’t wait to see what she writes next. And I have every confidence that Sam Eades and her very talented, focused team will help Sharon win even more fans.’

Katie Espiner, MD of Orion said: ‘Sharon Bolton is simply one of the finest crime writers working today and I could not be more thrilled that she’s joining Orion. Sam and the team have ambitious plans in place for Sharon, and her new book is absolutely stunning – clever, claustrophobic and nerve-jangling. She’s an incredible talent and it’s a privilege to be working with her.’

Sarah Adams, Fiction Publisher at Transworld said: ‘I could not be more proud of the Transworld team for all they have done to grow Sharon’s readership over the past decade. They have published her with passion, energy and relentless determination, as her brilliant books deserve. Our time has now come to part ways and we all wish Sharon and Orion every possible success in the future.’

Sharon (formerly S J) Bolton grew up in Lancashire and, with a BA in Drama from Loughborough University, spent the early part of her career in arts and entertainment administration. In 1991, she went back into full time education to study for an MBA at Warwick University, where she met her husband Andrew. She worked in the City of London for a number of years before a chance encounter taught her that she could write fiction. In 2001, she left the corporate world to become a mother and a writer.

Her first novel, Sacrifice, was voted Best New Read by Amazon UK, whilst her second, Awakening, won the 2010 Mary Higgins Clark Award (part of the prestigious Edgars) in the US. In 2014, Lost, (UK title, Like This, For Ever) was named RT Magazine’s Best Contemporary Thriller in the US, and in France Now You See Me won the Plume de Bronze. That same year, Sharon was awarded the CWA Dagger in the Library, for her entire body of work.

She has been shortlisted for the CWA Gold Dagger, the Theakston’s Prize for Best Thriller, the International Thriller Writers’ Best First Novel award, the Prix Du Polar in France and the Martin Beck award in Sweden.

With ten books to her name, Sharon is a Sunday Times bestselling author and has been described by a reviewer for that newspaper as being ‘unable to write a sentence not suffused with menace.’

Sharon lives with her family in the Chiltern Hills, not far from Oxford.

THE CRAFTSMAN will be published in Spring 2018 in audio, ebook and hardback.