Towards the end of last year I made one of the toughest decisions of my life when I chose to leave a relationship of ten years standing. For a decade I’d been nurtured and cared for, given the security and confidence I needed, pushed to achieve and caught when I stumbled. When times were good, I’d been cheered on and praised, I’d been comforted when things didn’t go so well. It was a relationship based on respect, gratitude, friendship and deep affection (for my part at least) and for years I hoped it would never end.

But two things happened. First, I fell in love. Then I learned that I’d changed, and that what had served me so well for ten years was no longer what I needed going forward.

Lest Mr B is breaking out the Babycham, I should probably clarify. I decided to move publishers. I signed a new contract just before Christmas and will be moving from Transworld to Orion for my next three books.

Because I had indeed fallen in love, in the Autumn of last year, with the passion, intelligence and energy of the Orion team. New imprint, Trapeze, led by Anna Valentine and with the remarkable Sam Eades on board, seemed fresh and vibrant, brimming over with innovative and intriguing ideas. Ultimately, their belief in what we could achieve together proved irresistible.

And I’d changed too. I wanted to write a different sort of book; a book that has always been bubbling away inside me; and that was telling me, with increasing urgency, that its time had come around.

On an early spring day in 1612, Richard Baldwin, a mill owner in the Pendle Forest of Lancashire chased two local women off his land, calling them ‘witches and whores,’ threatening to ‘burn the one and hang the other.’ Their crime had been to politely request money that was owed to them. Baldwin’s response set in motion events that led to the imprisonment, trial and execution of nine women on the charge of murder by witchcraft: the infamous Pendle Witch Trials.

Legend has it that female children born in the shadow of Pendle Hill are baptised twice. First, in church, to be welcomed into the family of Christ. And then again, in a dark pool at the foot of the hill, where they’re pledged to the service of another master entirely. 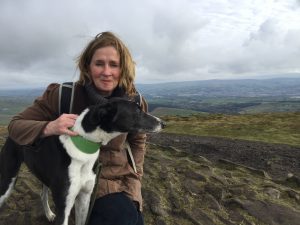 As far as I know, I was only baptized once, but I am a woman of Pendle. The women who were hanged in 1612 could have been my great, great aunts or my ancestral grandmothers. And from my earliest days I’ve known that, had I been born in such a time of misogyny and superstition, I might well have been marked out a witch.

Because I have always been different. The one who stood out. The slightly weird girl at the back of the class, who didn’t fly with the wind, or follow the beaten path. So, I’ve always been intrigued by what makes some women into witches. Is it something in us? Or does the fault really lie with all of you?

The north of England, my homeland, is a dark place. It is the place where, for hundreds of years, dissidents have fled and outlaws have thrived. Shortly before I was born, Ian Brady and Myra Hindley preyed upon children of the north. My teenage wings were clipped by the reign of the Yorkshire Ripper. Mary Ann Cotton, Harold Shipman, Peter Dinsdale, Donald Neilson, were all killers of the north. I’m often asked why I write the sort of books I do. Maybe this is why.

But, I’ve always wanted to write a book about witches. Specifically, how women become witches. Do they make that choice themselves, or is it made for them? I used to think the latter, that it is societies that create witches. Now, after several years of research, I’m not so sure. I no longer dismiss the idea of witchcraft.

The Craftsman is the story of women, and witches. Of the children we love and must protect. And of the men who fear us. It will be published in spring 2018 and I have no doubt I will have much to say about it between now and then.

In the meantime, no relationship ends without pain, and it is hard to say goodbye to my friends and colleagues at Transworld. I wish them well. I am sure they will continue to be the phenomenally successful and greatly admired publishing house that I’ve been privileged to be a part of for ten years. They will always have my gratitude and my love.