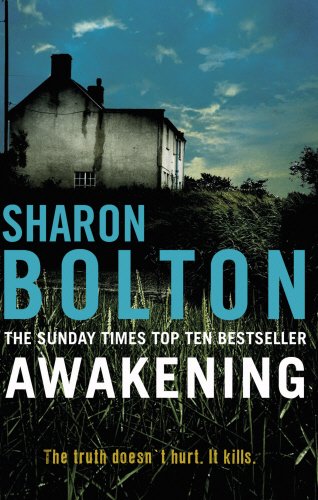 “Chilling, eerie and intense.” New of the World.

You know that feeling? The one that makes you want to glance over your shoulder?

All Clara Benning wants is a peaceful life as a wildlife vet, and to hide her disfigurement from the world.

But now she doesn’t have a choice.

Because a man has died from a suspicious snake bite, and Clara’s concern leads her to the abandoned house at the end of the lane, and an unspeakable tragedy that occured half a century ago.

Awakening sprang from several years observing life in the place where my husband, son and I have made our home over the last decade.  We live in a picture-postcard village in the Chiltern Hills, about fifty miles to the north west of London.  In so many ways, it’s the ideal place for a young family: except, perhaps, for its snake population!

So many of our neighbours have a snake story:  children found playing with a dead adder in the back garden, the clutch of eggs in the compost bin, the live adder that terrorised a mother breast-feeding her new baby, the grass snake in a teenager’s PE bag, the snake seen gliding peacefully up the High Street one summer afternoon, the dog walker who stepped on what she thought was a stick …they go on!

I began thinking about life that seems perfect, but with something sinister lurking beneath the surface.  I started learning more about snakes and quickly became intrigued; not just by their incredible beauty and power, but by their impact upon the mythology and culture of just about every people in world history.  I was also struck by how people’s fear of snakes can be totally irrational, way out of proportion to their ability to do us harm.  Of particular interest to me was the way the snake, or serpent, has crept its way into the Christian culture.

Awakening isn’t just about snakes though, and so many people from my village helped to form the story.  For a few years when my son was tiny, we’d continually meet the sweetest old lady out walking her terrier.  Several times a day we would have exactly the same conversation: she’d admire my son and tell me how sad she’d been never to have children of her own.  Her dog, she went on to say, was her child, and then she’d bend over and pet him.  One day this lovely old lady wasn’t there anymore and I’m sure she must have died, but she and her dog inspired the characters of Violet and Bennie in Awakening.

I also got to know an elderly couple in the village: a delightful old man who was a keen cricketer and talented gardener and his (rather eccentric) wife.  In the midst of one of the most affluent areas of the UK, in spite of the considerable value of their home, this couple lived in near poverty and in conditions that would have seemed primitive fifty years ago.  In the few years before they both died within six weeks of each other, I spent a lot of time talking to them, learning about the village when they’d first married, about people who’d been their friends and neighbours and, from the old lady, about her closeness to her husband’s brothers (hmmn!)  The portrayal of the Witcher family in Awakening owes a great deal to the stories they told me.

Plenty of people warned me about how difficult writing a second book can be, especially when one’s first has met with such a kind reception.  The reality, though, was that Awakening simply flowed off the keyboard and was a sheer joy to write from start to finish.  I fell in love with Clara at the outset and, pretty soon afterwards, with her two “suitors” Matt and Sean.  I think I even fell in love with the snakes.  Knowing that several publishers had already bought it was a huge boost to my confidence, even if it did pile a bit of pressure on.  Of course now that it’s about to hit the shops, I’m horribly nervous about how readers will react.  I’m conscious that it’s a much lighter story than Sacrifice, some may see it as less powerful for that reason.  We’ll see.

“… a clever, intricately plotted thriller, full of characters far from the conventional mould of the genre… S J Bolton has elevated herself to the High Priestess of English Rural Gothic. If she carries on like this, she’ll have worshippers in their millions.” The Times

“Chilling, eerie and intense, this is not one to read before bedtime.” News of the World

“…Bolton creates memorable characters and knows precisely how to ratchet up the tension and tell a cracking story.  A fine second novel by a new British crime-writer who is sure to make her mark – but not recommended as bedtime reading on a West Country camping holiday” Guardian

“This suspenseful thriller is certainly one of which Bolton can be proud.” Crimezone.nl

“Few authors are able to deliver at this level in terms of action and excitement.” Stavanger Aftenblad, Norway

“Plucky Clara… so troubled and so valiant, is irresistible.” Kirkus Review, USA

“Those seeking thrills this month need look no further than SJ Bolton who follows her debut, Sacrifice, with Awakening. Another gripping thriller… She just writes so well.” The Bookseller

“Bolton’s debut novel, Sacrifice, was scary enough but this is truly grim (in a good way). A well-written, original and atmospheric chiller.” Daily Mail

“…Bolton racks up the tension in preparation for a nail-biting finale … With two solid successes in the bag, its going to be very interesting to see what she offers us next.” Yorkshire Evening Post

It’s always great when a book club picks one of my novels, even if some of the questions they throw at me can be a bit challenging. If your group is thinking of reading Awakening, here are a few discussion points to get you started.