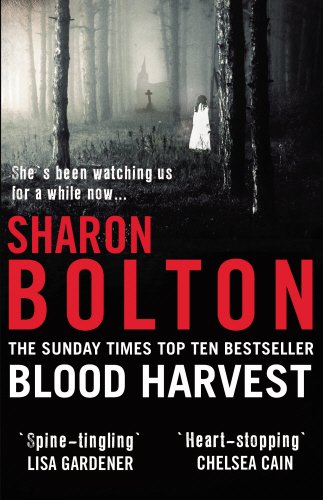 Now you see her

Gillian is haunted by the disappearance of her little girl two years ago. A devastating fire burned down their home, but she remains convinced her daughter survived.

Ten year old Tom lived by a neglected church. Is he the only one who sees the strange, solitary child playing there? And what is she trying to tell him?

There’s a new vicar in town – Harry. But menacing events suggest he isn’t welcome. What terrible secret is this town hiding?

Blood Harvest was shortlisted for the CWA Gold Dagger, the Theakston’s Old Peculier Crime Novel of the Year Award, the Barry Award for Best British Crime Novel and the Mary Higgins Clark Award.

Blood Harvest sprang from my life-long passion for the supernatural thriller.

I love the heavy, dark, brooding atmosphere of the best of these stories, the gradual but relentless build up of suspense, the dawning realization on the part of the characters that the world they thought they knew is quite different. And I’ve often wondered if I could write such a story.

At the same time, a tale of the supernatural, whilst wonderful in the telling, can ultimately disappoint. And sometimes, I sense a certain laziness on the part of some writers of supernatural stories; as though they feel they have a get-out-of-jail-free card. They don’t have to explain everything, or to tie up all the loose ends because when all is said and done – hey! – the ghost did it!

Of course, writing in the genre I do (and with the editor I have!) a supernatural thriller in the true sense just isn’t possible. Crime fans are very demanding readers and authors simply can’t get away with anything less than 100% plausible. Okay, make that 98%.

So I had to find another way. I had to write a story that might initially appear to be about the supernatural but which ultimately has nothing more, or less, than good old-fashioned human villainy at the root of everything that takes place.

Blood Harvest is set in the fictional town of Heptonclough on the Pennine moors in Lancashire, very close to where I was born and brought up.

Several years ago, my sister and her family, like the Fletchers in my story, bought a plot of land on the moors, next to an old church. They built a beautiful new house and not long after they moved in, when the children were the same ages as Tom, Joe and Millie in the book, part of the wall that separates their garden from the churchyard collapsed, opening up one of the old graves.

As a consequence, my sister and her husband found human remains in their garden one night. Great excitement followed, especially for those of us who didn’t actually live there. The remains were confirmed as ancient and reinterred without incident but it got me thinking. What if more bones had tumbled out than had been meant to be there? What if the bones had been those of children?

Children in danger are at the heart of this story and, probably for that reason, Blood Harvest feels like the darkest book I’ve written to date. But I had a lot of fun with it too, particularly when it came to researching traditional old English rural customs like the blood harvest and burning of the bones from the charnal house, and incorporating them into the book.

Instead of having one strong, central (female) character, which was the approach I took in my first two novels, in Blood Harvest we see the action from the point of view of three characters who take equal prominence in the story: 10 year old Tom Fletcher, new vicar Harry Laycock and Evi Oliver, the child psychiatrist brought in to work with the Fletcher family when their problems appear to be spiraling out of control.

Working with three rather than one brought challenges of its own and I had to spend much more time than previously on developing characters and relationships. This is the first of my books to contain a love story and I did enjoy writing that aspect of it. The pace of the book, particularly in the early chapters, might seem gentler than in both Sacrifice and Awakening but readers who’ve enjoyed the speed of my previous two books shouldn’t worry. There is nothing remotely gentle about the concluding chapters of Blood Harvest.

“S J Bolton has already made a considerable name for herself with her well-crafted, original and spooky crime thrillers Sacrifice and Awakening, and Blood Harvest is every bit as menacing.” Daily Mail

‘Bolton writes with amazing depth and it’s impossible not to get caught up in this fantastic tale. If words were notes of music, this book would be a piece to rival the classics. Engrossing to the end.’ Crimespreemag.com

‘If you like your thrillers gripping, not grisly, S J Bolton is a name to remember.’ Grazia Magazine

‘Bolton neatly treads the line between the supernatural and the psychopathic in a very scary tale of village secrets.’ Kirkus Review (US)

‘…frisson generating… satisfyingly atmospheric … fraught with dread and foreboding … Bolton is a solid, old-fashioned writer – and what higher praise could one give her?’ Barry Forshaw in The Independent

‘S J Bolton excels at summoning up the claustrophobic of rural village life. Her third novel is her creepiest yet.  This author doesn’t need gruesome murder descriptions and gritty urban streets to ratchet up the fear. The unexceptional, small town family life of Britain is her palette and she uses it to chilling, menacing effect.’ Alison Flood in The Observer

‘Blood Harvest is the book I wish I could have written. Heart-stopping, bone-chilling, and deliciously written. S. J. Bolton is a thriller star.’ Chelsea Cain

‘S J Bolton is one of the most gifted storytellers to come along in years.’

Christopher Fowler in The Financial Times (Books of the Year)

‘Alongside the chilling scenes of human depravity, there are also scenes of great humour, touching humanity and resounding heroism, making Blood Harvest a moving and wonderful read.’ Nina Sankovitch in The Huffington Post

‘Masterly cruelty. Few crime writers are able to combine a really good plot, sparkling imagery and nerve in a story, that keeps me … unable to put the book away until the last page is turned. S.J. Bolton achieves this.’ FYENS STIFTSTIDENDE, Denmark

‘A cold thrill for a warm day.’ WEEKENDAVISEN, Denmark

‘Her writing is alive, intense and thrilling. Her story is … a mix of wild imagination, steady suspense and a rare originality.  In short, brilliant entertainment of a fine quality.’ EKSTRA-BLADET, Denmark

It’s always great when a book club picks one of my novels, even if some of the questions they throw at me can be a bit challenging. If your group is thinking of reading Blood Harvest, here are a few discussion points to get you started.