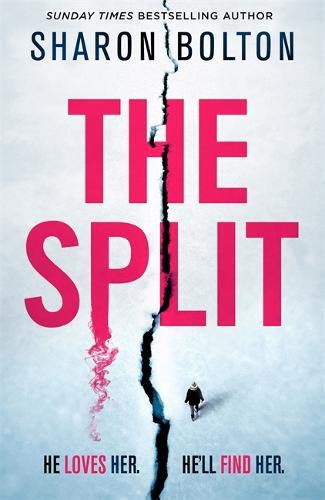 Felicity Lloyd, a young scientist, has accepted a research assignment on one of the most remote places on earth – the island of South Georgia in the South Atlantic. She thinks there, at last, she’ll be safe from her estranged husband, Freddie. He’s recently been released from prison and he’ll stop at nothing to find her.

As the summer season draws to a close, Felicity is starting to relax. Once winter sets in, the cruise ships stop visiting and no one can get to South Georgia. There’s one more ship to dock, any day now, and Felicity can’t rest until she knows whether or not Freddie is on board.

Well, spoiler alert, he is.

The Split starts as a classic chase thriller, with Freddie pursuing Felicity across the frozen wastes of this Antarctic island. She knows South Georgia well, and has had time to plan her escape, but she hasn’t allowed for his determination and stubbornness being as great as her own. In one of the most dangerous environments on earth, Freddie and Felicity finally come face to face – and the outcome is one no one could have expected.


In 2015 I published Little Black Lies, a story about guilt and grief, and whether love and friendship can withstand the trials of both. As far as I’m aware it was the first, and still the only, novel set in the Falkland Islands, a very small British protectorate in the South Atlantic. It involved a lot of research, because I don’t know that part of the world at all, and I spent many months reading books, poring over maps, watching videos and following social media channels. In doing so, I came across South Georgia, another British island, some four hundred miles closer to the Antarctic than the Falkland Islands and was immediately intrigued.

For most of its human history, South Georgia lay at the heart of the whaling industry in the southern hemisphere, at one time boasting four active whaling stations that employed over a thousand men. Hundreds of thousands of whales of every species were hunted and slaughtered here, to provide the whale oil demanded by the industrialised countries of the north. It is safe to say that South Georgia is largely responsible for the near extinction of whales in the south Atlantic and, to this day, the populations are proving slow to recover.

Whales aside, the island has become a wildlife paradise. Over two million fur seas, some ninety-five per cent of the world’s population, live here in the summer, as well as over half the world’s population of elephant seals, and four types of albatross. This is good news, of course, but the derelict whaling stations remain, a stark reminder of how mankind can devastate even the most perfect of places. The more I learned about South Georgia, the more I read, the more pictures I saw, it struck me as being at the same time, both incredibly beautiful and completely polluted by mankind at its worst. It’s four days sail from the closest human settlement, there are no airports, or any sort of road infrastructure. In the winter, there are only around a dozen people living there and the weather can be merciless.

Could there be a better location for a thriller?

But The Split isn’t just a thriller, it also has a mystery at its heart. Why is Felicity so afraid of her estranged husband Freddie? What happened between the two of them to turn him into a hunter, her his prey? So, in part two of the book, we find out, as we go back in time nearly a year and cross the planet to a place that couldn’t be more different to the wilds of South Georgia: the university city of Cambridge in the summer time. Here we see a different Felicity: a young woman afraid to trust the evidence of her own senses, who fears the inexplicable things happening around her could mark her descent into madness. In Part Two of The Split, we ask ourselves what do we fear the most: the enemy at the door, or the one in our own head.


“I’m a huge Sharon Bolton fan and this is her best yet…as always, great story, wonderful characters, all floating on a breathless buzz, somewhere between dread and fright.” Lee Child

“…delivers some of Bolton’s best chills so far – and that’s really saying something.” Seattle Review of Books.

“Sharon Bolton has assembled one of the most skillfully crafted suspense novels I have ever encountered. This is intelligent crime-writing at its best; not to be missed. ” Shots

“Bolton provides her readers with shivers worthy of her setting.” Kirkus Reviews, US.

“Bolton keeps the reader guessing to the end.” Publishers Weekly, US.

“Readers will tear through Bolton’s latest…” Library Journal, US.

“Felicity’s tale chills to the bone.” Booklist, US

“Atmospheric and beautifully written. A deadly game of cat and mouse at the edge of the world.” Erin Kelly

“Nail biting, heart-pounding suspense that leaps from one dizzying twist to another. The Split grips like permafrost.” JP Delaney.

“Dark, fascinating and full of surprises; the prose gleams like ice in the Antarctic sun.” Mark Edwards.

“Unsettling, absorbing and impossible to put down. I loved it.” Rachel Abbott.

“I love Sharon’s books and this twisty tale takes us back to the spooky isolated landscape of the South Atlantic she writes about so well.” Claire McGowan


Warning: this page contains spoilers. Do not read unless you have finished the book.

I’m always pleased to hear from bookclubs and will try my hardest to answer questions. Contact me on author.sjbolton@gmail.com