Twenty years ago we moved to the outskirts of Oxford. It is the city of my son’s birth, of his schooling, at 13 he was confirmed by the city’s bishop. I will probably end my days here, because I’ve grown to love Oxford in the way I never did my ‘real’ hometown.

But so many wonderful books, especially crime novels, have been set here; many of those (Morse, His Dark Materials, A Discovery of Witches) dramatized into hugely popular TV shows. Surely every cobbled alley, stone arch and mediaeval cloister has been seen countless times already? I wouldn’t so much be standing on the shoulders of giants as tumbling from them. 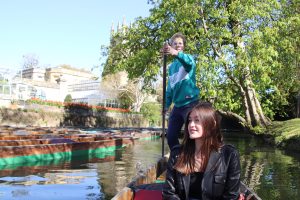 But some stories choose their own locations, and so it was with The Pact. Once I knew the story had to begin with the dreadful mistake of six talented but arrogant pupils at a prestigious private school, I had to base it on a school I knew well. In the book, it is All Soul’s School, but those who know Oxford will recognise Magdalen College School, on the Plain roundabout, a stone’s throw from Christchurch. As I was writing The Pact, my son (the same age as the characters in the book) was coming to the end of his time there, and so there is an element of tribute in the school-based scenes: sports pitches on a secret island in a bend of the river Cherwell, the white bridges leading out of the scented rose garden, the Harry Potter style underground tunnel. 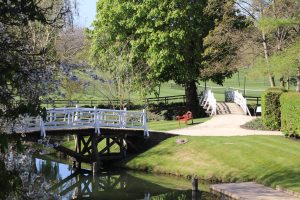 For the most part, the characters in my story are grown-ups, and inevitably gather in pubs. I avoided the cliches of The Lamb & Flag, Eagle & Child, and The Trout at Wolvercote. Great pubs, they’ve all featured too many times in Oxford-centred popular culture. I opted instead for The Perch at Binsey, a pub on the edge of Port Meadow, dating back some 800 years, reputedly haunted by a sailor; and the notorious Turf Tavern. Originating in the 12th century and described as the hardest pub to find in Oxford, the Turf’s narrow winding passageways and low ceilings make it perfect for nefarious plotting.

Not for me the done-to-death colleges; every cobbled alley, stone arch and mediaeval cloister has appeared many times already, not only in books, but in countless films and TV shows. That said, the MayDay scene is set – inevitably – in and around Magdalen College, and I couldn’t resist the stunning old library at Queens. For the most part, though, I was looking for lesser-known venues, yet ones that were still quintessentially Oxford.

Here are my favourite spots in Oxford, some of which appear in the book:

River Cherwell: Much is made of Oxford’s famous river, the Thames (Isis) but the Cherwell gives us the joy of punting.  A perfect summer afternoon for us is to pick up a punt at the Cherwell Boathouse and drift lazily down-river for lunch at the Victoria Arms in Old Marston. (Going back, upstream, is harder work.) For the less energetic, punts can be hired at Magdalen bridge for an easier trip around Magdalen school field, past St Hilda’s, the Botanic Garden and Christ Church Meadow.

The Botanic Garden, Rose Lane: One of the oldest scientific gardens in the world and built on the site of a Jewish cemetery. Some four hundred years after Jewish residents were expelled from the city, thousands of cartloads of mud and dung were transported in to raise the land above the river Cherwell. Dead bodies and dung – small wonder the plants thrive.

Port Meadow: A vast area of common land, easily accessible from the city centre, that reputedly hasn’t been ploughed in hundreds of years. The Isis (Thames) winds its way through the meadow’s heart, the ancient Godstow Priory guards its northern flank, and cattle and horses roam at will. Rowers, swimmers, canoeists, bridge-jumpers, walkers, runners and party-animals flock to Port Meadow all year round; on a sweet-scented summer evening, there can be no finer place to gather with friends.

The Ballroom Emporium, The Plain: The world’s biggest dressing up box! The most glorious collection of ball gowns, prom dresses, vintage wear, hats of all descriptions, fur coats, military costumes, everything you can name and tons of stuff you never thought of. The smell is of jumble sales, old ladies’ wardrobes, the back of deep, deep, cupboards. This shop gives the impression of being stocked with treasures, some of them buried so well you’ll never find them. It is a shop with a million stories.

Blackwell’s Bookshop, Broad Street: I love all bookshops; it’s wired into the DNA of an author and story lover to do so, but this could be my favourite. There’s something fairy-tale and Tardis like about it. Modest on the outside, but goes on forever once you’re through the doors, and the below-ground Norrington Room has to be seen to be believed.