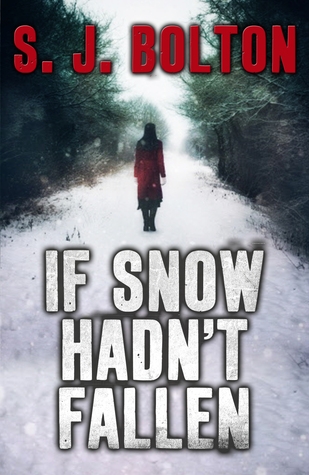 They say that snow covers everything that is mean and sordid and ugly in the world…but beneath the carpet of white, the ugliness remains.

London. A few weeks before Christmas. Long-smouldering feelings come to a head in a burst of shocking violence. A young Muslim man is brutally murdered by a masked gang.

There is just one witness to the horrific crime: DC Lacey Flint. Or at least that’s what she thinks…

A sign of a great story, for me, is when it doesn’t end at the close of the book; when, after the last page is turned, the characters live on and events continue, albeit in a more hum-drum, ‘now-let’s-get-the-kettle-on’ sort of way.

I do this with my own stories (not suggesting they’re great, you understand, just important to me). When I can’t sleep, I think about what A might have said to B when she finally came down from the tower, I think about where they spent that night and if they weren’t together (they weren’t) then why not. I like to picture C and D (and E the dog) coming back inside the house. Who makes the tea? Would D insist on medical attention and C claim she didn’t need it? Would D walk the dog? Would D stay the night? (of course!) But on the sofa or would they figure they’d wasted enough time?

Stories live on for me, even after they’ve officially closed, and none more so than that of Lacey Flint. When the book that introduces her, Now You See Me, comes to an end (Friday 9 November) her life has been blown apart. The secret she’s been protecting for years has come dangerously close to the surface, leaving her to wonder if she’ll ever be able to let her guard down again. She has fallen deeply in love, with the one man whom she can never allow to get close. She walks out of prison (visitors’ wing), believing herself to be responsible for several deaths and an even greater number of destroyed lives. How does she get through the rest of the day, let alone the weeks to come?

When we see her again, it is the second week in January, and Mark Joesbury, refusing to stay at a distance, is persuading her to take a dangerous undercover assignment in Cambridge. Those of you who’ve read Dead Scared will know how well that turns out! But what about in between? How did Lacey spend the time between leaving the prison in Now You See Me and walking into All Bar One, in Dead Scared?

If Snow Hadn’t Fallen is the story of what happened to Lacey and her new friends in those few weeks. It begins with her witnessing a horrific attack in the park near her flat, and sees her drawn into the subsequent murder investigation. The investigating team, the local community, even the media believe the crime is one driven by racial hatred. Lacey, though, isn’t so sure, especially as the only witness to the crime, other than herself, is a mysterious female figure who appears only after nightfall.

It’s a contemporary story, because the themes of racial unrest and religious intolerance are very real problems in our inner cities, but it’s also, I hope, a timeless story. That of the outsider, driven from home, with nowhere to turn, just as the Christmas season approaches.

“And there she was. Unmistakable against the backdrop of white. A solitary figure in the park, wearing long, loose robes of black, on the exact spot where the man had died. I only saw her for a few seconds before the lights flicked on but I saw that she was both tall and slim, and that, even standing statue-still, she gave the impression of both poise and grace. At the same time, her bowed head, her clenched hands, spoke of terrible sadness.”

It’s supposed to be a bit spooky. Because If Snow Hadn’t Fallen is also my take on the classic Christmas ghost story and is heavily influenced by one of the greatest of all, Susan Hill’s The Woman in Black.

I watched the stage play years ago, and thought it as engrossing and creepy as everyone said, but only read the book itself very recently. I loved it. I’ve long said, there is nothing like a good ghost story and The Woman in Black is little short of perfect. It’s horribly creepy and atmospherically beautiful at the same time. And it’s set at Christmas. If Snow Hadn’t Fallen is my tribute, my little piece of fan-fiction if you like, to the original Woman in Black.

Except, as you should know by now, I really don’t do ghosts. My woman in black is real, and she has a story to tell.