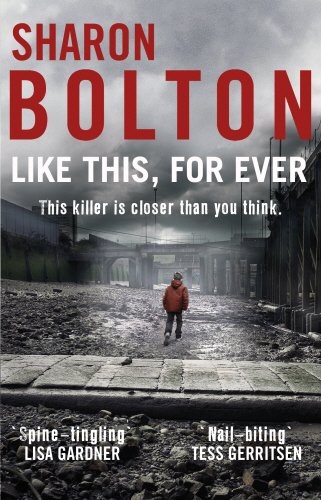 Twelve-year-old Barney Roberts is obsessed with a series of murders.

He knows the victims are all boys, just like him. He knows the bodies were found on river banks nearby. And he’s sure the killer will strike again soon.

But there’s something else, a secret he’d rather not know, a secret he is too scared to share . . .

And who would believe a twelve-year-old boy anyway?

Like This, For Ever is a twisty, addictive, up-all-night thriller from a writer who loves nothing more than to play with your mind.

LIKE THIS, FOR EVER is published as LOST in the US

It was coming up for that time, roughly every three years, when my agent and my editor get together to discuss my new contract. For them, it’s all about the long lunch, a bit of publishing gossip and a nice chat about shoes. For me, it’s about speed writing at least three books in as many weeks, with outline plots, casts of characters, settings, themes (pure guesswork because themes tend not to appear until near the end) twists (ditto) and that extra bit of pixie dust that will make this book stand out from all the rest published that particular year.

Well, I aim to please. For the sake of brevity, we’ll call my three ideas A) Shroud, B) Mermaid and C) Voodoo. I worked up seven or eight page submissions on each and sent them in.

Oh, and there was a postscript: “Another idea I’d like to have a look at some time, maybe next contract renewal, is that of a young boy who thinks his father could be a serial killer.”

Guess which one they loved? Guess which one I had to work on straightaway? So there I am, start date imminent and my Work-In-Progress file entirely blank apart from one sentence. Sometimes, that’s just how it happens.

Luckily, the more I thought about that one sentence, the more it intrigued me. I remember only too well, back in the 1970s and early 80s, the hunt for the Yorkshire Ripper. (I lived in the north of England at the time.) I remember the pseudo Ripper, who made taunting tape recordings and sent them to the investigating team. And I particularly remember a news story about the number of women in the north who went to the police, in emotional agony, because they’d convinced themselves that a man they knew and loved was the Ripper.

What those women must have gone through before they made the incredibly brave and selfless decision to share their fears, I can only imagine. But I remember the sobering conclusion of the news story, which was that everyone in that area, at that time, must have asked themselves: Do I know this man? Is he someone close to me?

Imagine then, if the person suffering these torturous doubts and dark fears, is a child.

Well, the child of my one throw-away sentence is an only child of a single parent; already, way, way too vulnerable. Because when a world is populated by just two people, that world is invariably built on sand. How could the child survive if the one person he had remaining to him was taken away? How could such a child be anything other than horribly insecure?

So, let’s take this worst of all scenarios and paint it darker! Let’s make the parent, whom the child loves and depends upon above all else, the opposite of what he appears to be.

Like This, For Ever is the story of eleven-year-old Barney Roberts and his father, Stewart. Barney is a sad, strange, sweet young boy, and one with an unusual gift for finding things that are lost.

Stewart does his best to be a good parent, but he has a job and Barney spends much of his time alone. Barney’s mother went out of their lives years ago. In fact Barney’s earliest memory is of his father telling him that mummy had to go away for a while. So it’s just the two of them.

In the winter of Barney’s last year at primary school, boys of his age in South London start disappearing. Their blood-drained bodies turn up several days later on the banks of the river Thames at low tide. At first, Barney and his mates are rather excited, loving the vicarious thrill of being so close to the ultimate bogeyman – the serial killer who preys upon boys just like them. But Barney has an enquiring mind. He takes an active interest in the case. He starts to see patterns and clues that the police may have missed. He starts to suspect the killer could be a lot closer than even his darkest dreams could have imagined.

Like This, For Ever is also the continuing story of detective Lacey Flint. After three back-to-back, bad-as-they-come cases, Lacey has hit rock bottom. For years, her job has meant everything. It has, quite literally, been all that she has, and now she faces losing even that.

But as Lacey is on the brink of leaving the police service for good, the killer takes a step too far. When the latest victim is the one child she cannot allow to be lost, broken, worn-out Lacey has no choice but to step back into the fray.

SJ. (now Sharon) Bolton’s frisson-generating Blood Harvest gleaned her many followers and she is at her best with a dark psychological crime narrative, as here. Barney’s childhood has been less than ideal – he has a direct line to a killer, one who is likely to strike again. The victim is likely to be another boy – a boy, in fact, just like Barney; it will be a body drained of blood and left on a beach by the Thames. But will detectives Dana Tulloch and Mark Joesbury be up to this case? Typically gripping fare from the reliable Bolton.

It’s always great when a book club picks one of my novels, even if some of the questions they throw at me can be a bit challenging. If your group is thinking of reading Like This, For Ever, here are a few discussion points to get you started.