I was looking forward to finding out. I’ve done numerous book tours, reader events and signings, but rocking up in bookshops some weeks before a book is published was a new one on me. 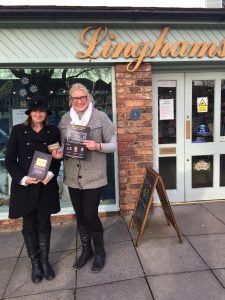 It starts early. Oxford station at the crack of dawn in my case. Within an hour it became clear that publicists do the hard work on tour. Overhead lines down between Preston and Lancaster meant the journey was cut short before I was out of Oxfordshire. Cue frantic phone calls and texts on the part of Orion’s Elaine and Leanne to sort it out. I got on with my work (see Perfect the Pitch below)

First stop, Waterstones Preston, where we met manager Amy and I had the interesting experience of pitching my new novel in a store full of kids on half term break. Next, we leapt into a cab (not that easy in Preston, they tend not to lurk – maybe it’s too cold) heading out of the city to Askew & Holts Library Suppliers where we met the lovely Sarah and were agog at the sheer logistics involved in getting books out to libraries. (Cheeky boast – I’m a library ‘super seller!’) 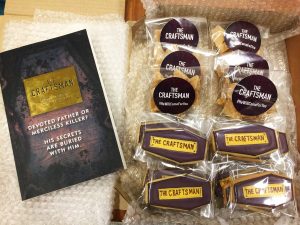 Back in a cab to Lytham St Annes to say hello to the delightful Pat of Plackitt & Booth bookstore and a real life fan – Paul – who carried away one of The Craftsman books there and then. (Damn, we’re one sale down already. This is not how it’s supposed to work.)

The day was getting colder, and we were flagging, but we still hadn’t done Lancaster and as I kept reminding the girls, Lancaster is where the Pendle witches were imprisoned, tried and executed. We couldn’t miss it out. There are two Waterstones shops in Lancaster, and we had the unusual experience of having our fudge, biscuits and chocolate turned down by two vegan booksellers. On the other hand, they were charming and completely enthusiastic about a locally set thriller, so we forgave them.

More trains. Proof tours are about sugar and trains. Slow trains. I had no idea how many small stations there are in the north west and trains aren’t easy when you’re loaded down with books, chocolates and biscuits, but eventually we arrived in Manchester and could relax and get warm. 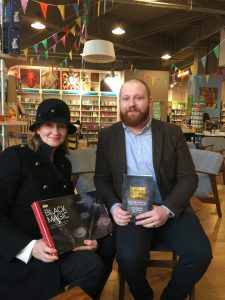 A slightly later start the next morning took us to Waterstones Arndale where lovely manager Callum sat us down for coffee and a chat (Note to booksellers – a few minutes of quiet attention is hugely appreciated) Then off to Liverpool Lime Street where we met up with my editor Sam, who was so keen to join us she’d arrived at Euston two hours early for her train. Sarah at Waterstones Liverpool was clearly a firm favourite with the girls and it wasn’t hard to see why. She was full of enthusiasm for books in general and mine in particular and we were happy to talk about an event in the spring. (Another note to booksellers – when publishers visit, they are sounding you out for all sorts of exciting future partnerships. Authors are ten a penny, but editors and publicists wield enormous power.)

A definite highlight of the trip was lunch at Liverpool’s super glamorous Restaurant, Bar and Grill with uber blogger, Costa judge and Twitter celebrity Simon Savidge. Simon has been a great supporter of mine almost from the very beginning and it was great to hear all about his new job and wedding plans. We talked a bit about books too. Last stop of the day, courtesy of a hilarious scouse taxi driver, was Lingham’s bookshop on The Wirral. Owner, Sue, another favourite with the team, gave us a lovely welcome. 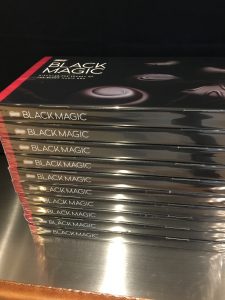 So there you have it. Exhausting. Cold. Many trains, but on the whole an invaluable chance to meet men and women who make their living from books and who wouldn’t dream of doing anything else. Spending time with them, if only for a few minutes, was a great privilege.

As with all events, though, I figured a bit of advance planning would be key, and so it proved. Here are my top tips.